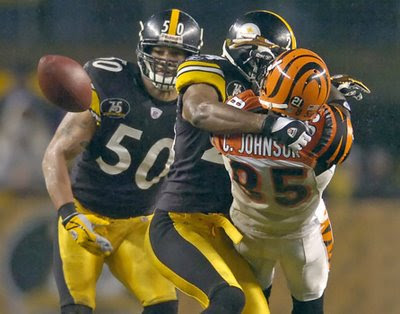 1) In the wake of the Chicago loss it has been difficult for us to post anything because discussing anything Steelers related after a loss puts us all in a terrible mood. It is time to look forward to this Sunday and the game against the Bengals. Ben has an exemplary record against both teams from Ohio. That hasn't stopped the pundits from already beginning to call for Cincy to upset us at Paul Brown Stadium this Sunday. On The Herd this morning, both Colin and Herm "We play to win the game" Edwards picked Cincy to win this week.

At the beginning of the season, I had this game marked clearly as W. Now, I can sadly see some validity to their arguments. First, Troy's injury has resulted in a marked drop in our secondary's ability to cover. Cincinnati has a decent passing attack with big receivers. If they follow the Bears blueprint to beating us and give Carson Palmer decent protection we may be in for a long afternoon. Cedric Benson has been having a good season under the radar. They ran all over Green Bay's new 3-4 D last week. Also, Cincy's D is quietly ranked 12th and the league. They gave the Packers all types of problems, consistently getting to Rodgers time after time. The Steelers O has had flashes of greatness this season but the run game is not there and the passing game needs to be more consistent. This is like the Superbowl for the Bengals. If they can beat us this Sunday, they will believe that they have a realistic shot at winning the division this season.

2) Interesting contrast between the first game and the second game of the season for Jeff Reed. He was one of the heroes in the opener and now he is the goat in the second game of the season. For the first time I can remember, he is the goat. Most of the Steeler fans I have talked to can't even remember a game where he missed two kicks. He has been more than solid for the Steelers during his career, especially when the game has been on the line. What adds a bit more intrigue to this story is the fact that this is a contract year for Mr. Reed. He has reportedly already turned down one offer from the Steelers. It will be interesting to see how this plays out over the course of the season, especially if he makes missing kicks a habit.

3) Apparently, Tomlin wants the Steelers offense to resemble that of the Patriots. I would like this too. If he really wants this to happen he needs to fire Bruce Arians and Larry Zeirlein and replace them with competent coaches. Also that means using the pass to set up the run for the most part. One thing that I don't think has gotten too much attention in the whole offensive line/running game atrocity is the switch from a man to man blocking scheme to a zone blocking scheme. I am no expert on football blocking schemes but it just seems like there was a major drop off from when we had Russ Grim and Whisenhunt running the offense to Arians and Zierlien. Go back and watch some playoff games from the 2005 Superbowl season paying close attention to the play calling and protections. It is night and day from what we run this season. I was telling Josh that I think we run the plainest offense in the league. We don't do anything to change up the pace. No reverses or end arounds, no trick plays anymore, we run to the right every single time. I loved the play call to Spaeth on 4th and goal but those are few and far between. Where are the tosses? These used to be a staple of the short distance to go offense and I haven't seen one in a good while.

Here is a fairly in depth review of the Steelers O from the Bears Game.

That's my two cents for now.

Tomlin Thursday coming tomorrow. Who is excited? Comments are greatly appreciated.
Posted by Elliot at 1:26 PM

I love Tomlin Thursdays, easily my favorite day of the work week. If I was ever in a situation where all hell was breaking loose - Tomlin's the guy I would want to lead me out of it. Most badass coach in the NFL!