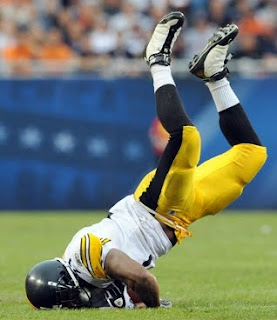 Last week, we told you not to panic. This week, I hope you'll tell us not to panic.
We are only three games into the season. All is not lost. The Steez have an unusually easy schedule after next week's game with San Diego. But, this is certainly not how I imagined the Super Bowl champions would start the season. It's like 2006 all over again.
In a game similar to the one against Chicago, Pittsburgh managed to lose to the lowly Bengals despite drastically outplaying them for three full quarters. Through the first three quarters, the Steelers outgained the Bengals 364-134. Yet the domination on the field did not manifest itself on the scoreboard. The Steelers held a 13 point lead in the first half and an 11 point lead in the 4th quarter, but those numbers could have been much larger.
Continuing a recent trend, the Steelers moved up and down the field, but couldn't score touchdowns. Twice they were held to field goals from 1st and goal at the 10. Once Jeff Reed missed a field goal. And Limas Sweed dropped another sure-thing touchdown that could not have been more routine. Add to that a Roethlisberger pick-6, and the Bengals were able to keep the score close despite being dominated in most major categories.
Perhaps, the most disappointing thing for Steeler Nation to see was, for the second straight week, the defense collapsed in the 4th quarter. After allowing a 70+ yard touchdown drive from Jay Cutler in the 4th quarter, it allowed touchdown drives of 85 and 71 yards to the Bengals (the BENGALS!) in the last 12:45. The defense struggled to pressure Carson Palmer and finished its second straight week without a turnover, which is especially difficult to take knowing that Jay Cutler and Carson Palmer both had 4 interceptions prior to their games with Pittsburgh. Despite the poor fourth quarter play, the Steelers defense had an opportunity to win the game with 35 seconds left. On 4th and 10, the team needed just one stop to win the game. But, James Farrior could not stay with Brian Leonard on a short drag route. And the next play, Carson Palmer threw the winning touchdown pass to drop Pittsburgh to a 1-2 record. The same record as the Detroit Lions.
Pittsburgh learned the same lesson this week (and last week) that the Steelers opponents learned last year. You can't let teams stick around. Given a chance in the 4th quarter, any team in this league can win. The Steelers won in an inordinate amount of close games last year, and no team can consistently win those games. All three of Pittsburgh's games this year were of the nail biter variety. And unless this team can learn to dominate an overmatched opponent on the scoreboard, the expectations of making a magical playoff run will quickly disappear.
Other nitty gritty thoughts from the game:
Offense 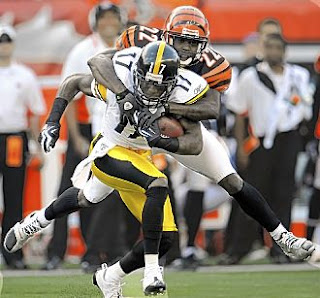