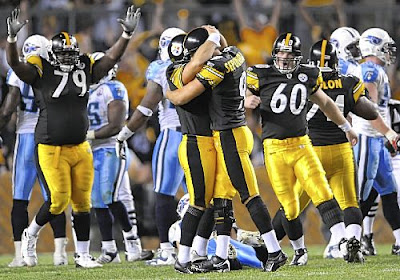 Here are some delayed thoughts from Week 1. I haven’t really gotten a chance to look at much video from the Steez game as school, work, and an unfortunate tragedy have been in the way. But from being at the game I will give my thoughts and I will also include the post game thoughts from the infamous Scerb since he hit the nail on the head with his email to us.


This is a good win, ugly it may have been but the Titans are a tough team and a win against a tough intra-conference will go a long way looking down the road. Not only do the Titans have a loss already but the Steez will hold a tie break over them if their records are identical at the end of the year. Ben essentially had three come from behind/game winning drives in this one game (tied it at 10, Ward fumble, Skippy field goal). This is incredible, but we still need to finish off our drives with 6 and not three. Ben had some not so good throws a la his 1st INT and the underthrow to my new almost favorite Steeler Mike Wallace. Hopefully this isn’t the Guides (Gweeds?) but I think he is in for a big rookie year. He saw a lot of snaps on Thursday night and seems to me that he is the clear #3 receiver as of now. As per Post Game Heroes, Wallace saw 52 snaps while Sweed only had 14.

Here are Scerb’s thoughts before I continue with mine:

We can't run the ball (obviously). Mewelde may be our best back. Willie has no vision. He might as well close his eyes and run full speed into someone. Neither he or Mendy can shed tackles. Someone taps them on the shoulder and they fall down. Anyone hear faint chants for Issac Redman??!!

The run blocking is not helping any of the above causes. I saw some things out there that guys should be ashmed of. Notably Hartwig and Frank the Tank completely whiffing on blocks. Saw Frank one time jumpin front of a tackler without so much as messing up the tackler timing. Also saw Hartwig a couple of times on 3rd and short simply fall over after snapping the ball. He's an awful center and something we better address next draft. The short yardage stuff drives me crazy. Same issue as last year, when we need one freakin yard, we can't get it.

Troy looked unbelievable before leaving the game. Our defense is completely different without him. Good thing we've got some easy games early in the season. If he's nagged by injuries all year I'm officially boycotting Maddden and will never play the f'in game again (not that I do anyways). Btw, the PI call on him was one of the worst I've ever seen. Troy didn't even touch the guy, then the dude, knocked Troy over, and they called him for a penalty!!!! YEAH

James Harrison almost snapped someone's leg in half (one of their receivers, Scaife, maybe). He's an animal. So is Woodley. Hopefully Timmons will be back next week (should be, we have 10 days).


Anyway, it was nice to get a win on a sloppy night, especially against a good team in the Titans. However, this team has a long way to go.


I agree with the Scerb in almost every aspect.
Willie Parker had an awful game. There was one run where he had gained yards (amazing enough) and had his receiver blocking his man to the inside of the numbers and Willie instead of running behind the block and into the open field chose to run directly where the receiver was blocking his man to which then resulted in him only gaining a few yards which could have been a big gain. Just one instance of how blind he was running. Mendy wasn’t really on the field but has he given us a reason to want him on the field? He does deserve a shot but he really needs to capitalize on the few chances he does get. He has yet to do that. Mewelde is our best option in the backfield right now. He is better at catching and blocking than the other two and is running a lot better right now, too. I don’t know who is better at catching the football Parker or Ike Taylor. They both have Cubes as hands. I have also proposed that we should never run the ball again.


Frank the Tank played terrible. He couldn’t block a soul much like the O-Line in running situations. It got the point where Josh and I were relieved to be in shotgun and throwing on third-and-short, one of our biggest pet peeves. I remember a play from Thursday where after the play I looked at the line of scrimmage and the entire right side of the line were on the ground with no Titan player in site. Hartwig, Essex, and Colon. Then I saw Kemo five yards in the backfield. Good God man. Pitiful performance by the O-line. The pass protection was good in the second half but like Scerb said they weren’t bringing anybody and they still let up 4 sacks. At least one was Ben’s fault, which was probably his worst play of the night. When you are in field goal position you can’t take a 14 yard loss in a tight game. Early in the first quarter the man sitting behind me seriously said put in Batch so we can win. I hate stupid people.


In a separate e-mail, Scerb guarantees Hines will not fumble again this year. Should Hines have just “taken a knee” or do you agree with him trying to score right there? Initially I was irate and said to just go down, which I still think is the right play, but we all know Hines has a nose for the end zone and after seeing the replay he probably really thought he could score easily and didn’t see the guy coming from behind. I still love you Hines but please don’t do that again.


I lost some respect for ‘Tone as well, even after an awesome game which was the exact stat line of an MVP performance, for wearing the Vick jersey after the game. Not just because it was a Vick and Eagles jersey, but because you should never wear another team’s apparel during the season or especially in an interview. If you want to show your support for Vick make a shirt that says “I support Mike Vick” don’t wear a jersey next time bud.

I’m sure Josh and Elliot have more to add in the coming hours and days. Pictures and Jersey fouls, too. Thank you Steezbros and Steezmom for a great time at the game and the Torrell’s for the tickets. Thanks Scerb for your take on the game as well.