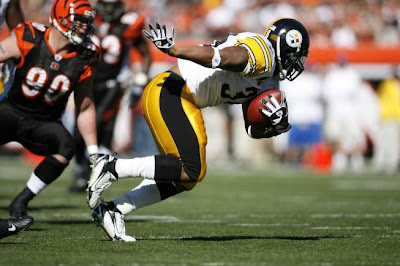 Much maligned, in these pages, full back Carey Davis has been re-signed by the Steelers according to the Post-Gazette. With Frank Summers performance being less than stellar and rookie tight end David Johnson suffering injury, the front office decided to bring in a familiar face. Just what we needed to get the offense going, a FB who constantly falls down short of the first down marker. Since Bruce Arians doesn't like to run behind a full back normally, I'm not sure why we didn't bring in another TE. He is in love with 3 TE sets but Willie Parker prefers running behind a FB so maybe that played into the decision. The Steelers were also very high on Davis when most of the fans and the media weren't.

UPDATE: Frank Summers has been placed on IR ending his season.
Posted by Elliot at 4:35 PM

Great... Just what I always wanted.