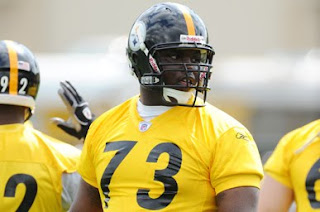 Sonny Harris, a rookie defensive tackle drafted in the sixth round from Oregon, was claimed by the Carolina Panthers. Harris played well throughout the preseason and showed promise, but was ultimately waived for players that could make a more immediate impact, specifically Travis Kirschke and Nick Eason. I would have loved to be able to keep Harris around because sooner or later the Steelers will need to replace the aging defensive line. Harris had the potential to develop into a starter within the next three years, but the Steelers are in "win now" mode. Kirschke and Eason are much more familiar with the defense and played a significant amount of time last season as the Steeleres began rotating defensive lineman. Harris would not have made a contribution this season. It's always a balancing act between keeping promising young guys and veteran role players. No doubt Coach Tomlin and Kevin Colbert would have loved to keep Harris on the practice squad. Knowing now what we know, I'm curious if the team would have kept Harris on the team in place of one of the veterans.

One fan favorite that potentially could have been claimed - Isaac Redman - cleared waivers and was placed on the practice squad. He could make an impact next year if Willie Parker is not resigned.